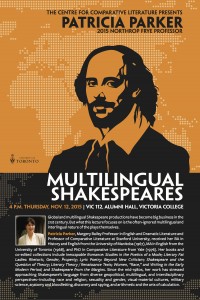 The Centre for Comparative Literature, University presents
A public lecture by our 2015 Northrop Frye Professor

Global and multilingual Shakespeare productions have become big business in the 21st century. But what this lecture focuses on is the often-ignored multilingual and interlingual nature of the plays themselves.

Patricia Parker, Margery Bailey Professor in English and Dramatic Literature and Professor of Comparative Literature at Stanford University, received her BA in History and English from the University of Manitoba (1967), MA in English from the University of Toronto (1968), and PhD in Comparative Literature from Yale (1976). Her books and co-edited collections include Inescapable Romance: Studies in the Poetics of a Mode;Literary Fat Ladies: Rhetoric, Gender, Property; Lyric Poetry: Beyond New Criticism;Shakespeare and the Question of Theory; Literary Theory / Renaissance Texts; Women, “Race,” and Writing in the Early Modern Period; and Shakespeare from the Margins.Since the mid-1980s, her work has stressed approaching Shakespeare’s language from diverse geopolitical, multilingual, and interdisciplinary perspectives–including race and religion, sexuality and gender, visual-material cultures, military science, anatomy and bloodletting, discovery and spying, and arithmetic and the arts of calculation.